Jason Manford hosts another edition of the comically-minded variety series, packed with musical and speciality acts. Guests include Hal Cruttenden and Nina Conti. 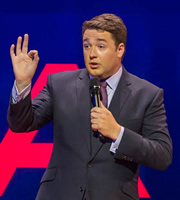 Tonight, chart-toppers Maroon 5 fly in for a rare UK appearance in which they perform their current single Maps. Disco legends Earth, Wind and Fire top the bill with a selection of their classic hits.

Ella Henderson unveils her new song, Glow, the follow-up to her summer number one hit Ghosts, and Evita star Madalena Alberto performs a classic song from the musical.

Canadian acrobats Les 7 Doigts de la Main catapult themselves onto the stage and some of the biggest names in comedy join Jason to provide the laughs. Another member of the theatre audience has the chance to win a star prize in the Top of the Bill quiz.