Bradley Walsh hosts another mix of comedy, music and variety in the revived entertainment show. 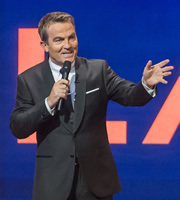 There is also an exclusive preview with the cast of new West End show Memphis: The Musical, starring Beverley Knight and Killian Donnelly, and performances from street dance troupe Diversity and Canadian speciality act Catwall Acrobats.