Hubble is sent to investigate a burglary at Buckingham Palace but the evidence points to him as one of the thieves.
Preview clip 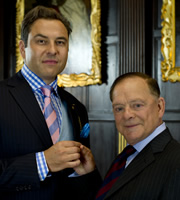 There's been a burglary at the Palace and The Queen enlists Hubble to source its culprit. But there is more concern when it appears that the thieves were unwittingly assisted by Hubble, much to his boss's joy.

Guy's endeavours to make things right put him in a sticky situation.

'Hubble... You Forgot The Money'