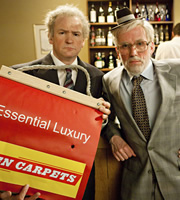 Sketch show starring Alexander Armstrong and Ben Miller, featuring the Exciting Chefs, a confusing Home Secretary, and the story of how the British really won the war.
Preview clip

The Home Secretary is on a call to his interior designer using his bluetooth earpiece, at the same time he conducts a meeting with his press secretary to discuss the asylum application of an African gay basketball team.