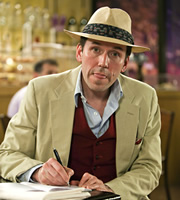 Featuring two prudish saleswomen, Yvonne and Lisa, who run an underwear shop; the return of Brabbins and Fyffe; and the frustration of an astronaut whose jealous computer won't leave him alone.
Preview clips

In a heated topical debate on a radio show, the male presenter takes his two female guests to task.

Brabbins and Fyffe are convinced that they are gentlemen of culture, especially as Teddy Fyffe has just been appointed 'Burlesque Correspondent' for The Lady magazine.