Sketches include the actor who gets naked for his art; a sexy scarecrow; and the Numberwang robot who tries to take over the world.
Preview clip 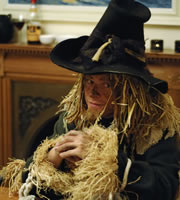 Police are on the trail of a fiendish killer. They are desperate to establish his identity before he strikes again, but all he has left at the scene of the crime is a passport-sized photo and two recent utility bills.

Unlucky in love Liam meets his dream lady but, when he tries to woo her, it turns out he has a rival for her affections - a sexy scarecrow.

Meanwhile, breaking news - the UN have given up the war on terror as it's just too difficult. Instead they've declared war on the easier to defeat Bill Oddie.

And finally, it's Numberwang Night on BBC Two, and time for a look back at the history of the massively popular TV game show, from its invention, through its involvement in the cracking of the Enigma Code, to the time Numberwang's very own evil robot tried to take over the world.

A History of Numberwang

A sketch looking at the history of the Maths quiz.