In this episode you can find out the correct but confusing way to talk to Caesar; there's a great new way to spot the emotional subtext in TV drama; and there's a man who is very angry about grammar - and he's got a gun. Plus there's a chance to meet David's surprising new wife.
Preview clips 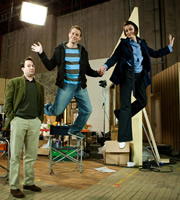 * Up Yours Parents: Park

* "I don't know what you want" emphasis

* Behind the Scenes: David Mitchell's wife

* Advertising campaign for the Titanic

Forget the iPod, what you need is an iBag. Robert Webb reveals the new product via a colourful and eye-catching advert.

The ship-building team discuss the best marketing slogan for the Titanic.