The second series starts with a look at the ancient art of padlock folding and an advert for the film The Numberwang Code. 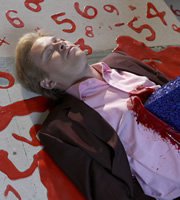 The first episode of the new series, in which viewers are introduced to The Helivets - pink jump-suit clad heroes who claim they can save any pet in peril. And there's a director whose art mimics life and whose credits include The Man Who Has A Cough And It's Just A Cough And It's Fine.

Also featured are The Carry On Hospital, in which a young doctor finds himself working in a bawdy Seventies hospital, but can't quite master innuendo, and Bigfeet and Redbeard, two stone-age workers put out by the thought of having to attend a bronze orientation day.

The episode also includes a clip from a documentary sensitively entitled The Boy With An Arse For A Face, the ultimate football trail, and a thrilling new action movie based on the world-famous Numberwang game show.