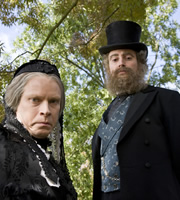 Robert Webb and David Mitchell return to BBC Two for a new series, which opens with sketches, including the difficult home life of Santa Claus, Mrs Claus and Santa's troubled brother, Russ, who refuses to get a job: "I'm not going back on the assembly line - not with the elves."

The duo also show off Jan Hankl's exciting new technique for finding books and car keys simply by patting your thighs; explain the best way to discover a murderer - get all the suspects together in a Twenties drawing room and wait until one of them starts doing an evil voice; and reveal an argument between Queen Victoria and Lord Palmerston about things you definitely can't mention if you're Victorian.

Among returning characters, there's Hennimore and his boss, who work in an office that is destroyed each week by completely unpredictable accidents. This week, there's a tragic mix up involving a set of golf clubs, a bottle of Scotch and a bitter hatred of Jack Nicklaus.

A policeman explains to a Community Support officer why he can't commit police brutality, only "Community Support brutality". There's part one of a thrilling new quiz show coming just after the end of civilisation, where contestants compete to win top prizes like food and fuel. And the lazy writers return with the least-researched-ever series about spying: "My wife suspects I'm a spy" "How?" "Too many unexplained buttons on the dashboard."

And, on top of all that, a genius explains why firing a dog out of cannon is better than a doorbell.

David Mitchell and Robert Webb present a game show from after the apocalypse.

A brain surgeon bores everyone at a party.