Sketches include a farmer who tries to teach his horse French and a robot that nearly manages to smell cheese. 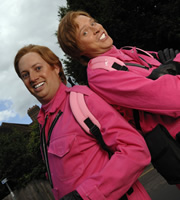 The Helivets are back, and they have found a gerbil who is stiff and smelly. Can the heroes save him? And there's a team of obtuse advertising creatives trying to think of some suitable music for an RSPCA campaign about unidentified people who have let some dogs out.

Also featured are the ultimate reality TV show in which some cryogenically-suspended corpses are re-animated, and another clip from the People Who Have Grown Into Spectacularly The Wrong Shape series. This week follows the moving story of Alan and his 19 penises.

Meanwhile, Chris, a robotics wizard and gourmet chef, has his life torn apart when he loses the power of smell, before creating the world's first smelling robot, Cheesoid.