A group of explorers debate whether Virginia might be quite an odd name for a colony and a disturbing look at flamingoes. 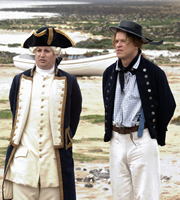 From the BBC archives comes the fore-runner of Tricia and Jeremy Kyle, a remarkable Forties edition of The Mrs Patricia Wilberforce Programme. In this sensationalist show Mrs Wilberforce introduces "a gentleman who sometimes behaves in an inappropriate manner and an unmarried lady in an unfortunate condition."

Elsewhere, Sir Walter Raleigh names his latest discovery Virginia. His First Mate wonders if it's "a bit personal, to name a new land after the fact that our Queen's never done it", whilst Captain Cook and his First Mate debate whether Australia really does look like a sort of new South Wales.

Meanwhile, in an informative, if slightly complacent, news broadcast, it turns out that everything is fine, broadly speaking. Apart from all the deaths.