A historian can't quite control his arms and a supervillain gets a little bogged down in Health and Safety. 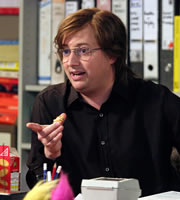 Two new recurring characters - Colin and Ray - share an office and swap tips on their different jobs. Ray writes the plots for pornographic movies. He starts with a piece of paper with "they have sex" written on it 14 times, and then fills in the gaps. Colin works as a hostage negotiator. He prefers the warm safety of the office to shivering on a rooftop. "It's very difficult to give a shit when you're cold."

Meanwhile, an evil supervillain asks a builder to install a revolving wall, only to find out that it's load-bearing. To rub salt in the wound, it turns out that his trap-door and piranha tank also have some health and safety implications.

The lazy TV writers return, and they have written an American courtroom drama about Speedo, a legal genius with a difficult relationship with his daughter and a limp caused by his very tight Speedos. They have not researched the legal details, as they don't want to get too bogged down in that kind of thing.