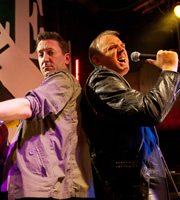 When Tim joins a band at work and Lucy falls for the lead guitarist, Lee becomes jealous, and decides that if he can't beat them he should join them.
Preview clip

I've Always Dreamt Of Being in A Band

Lee becomes jealous when Tim joins a band... and wants to join in the fun. The two end up singing Barbara Dickson and Elaine Paige's number one hit I Know Him So Well...