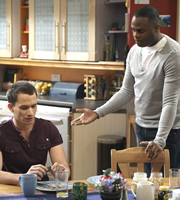 Ben and Susan go off to a couples' retreat for a weekend - at which they prove to be less than ideal guests - leaving Janey and Michael vying for the affections of Michael's new boyfriend. But the triangle proves to be more Bermuda than eternal.
Preview clip

This is the fifth episode on the DVD release of Series 11.

Ben's paranoia is exposed when he thinks Susan's discovered his male pattern baldness brochure. He may be wrong about what Susan is reading, but joking aside, Ben isn't too keen when he finds out what Susan is planning.