Ben joins the young Harpers for a pub quiz, which leads to some awkward questions being asked. 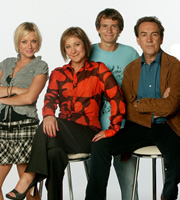 It's Ben and Susan's wedding anniversary. Ben is trying to write a loving message in a card but is having serious difficulties, despite fierce prompting from daughter Janey.

Janey sets off for the local pub quiz with her brother, Michael, lodger Alfie and Ben's annoying work colleague, Roger. Ben is insulted that he wasn't invited but decides to tag along anyway.

As their team falls behind in the quiz, Alfie points out that a player on another team has been cheating by texting all night. Ben decides to confront the phone cheat, Barry, who invites him outside to settle their disagreement. Ben backs out of the fight but is determined to get into shape so he can return to confront Barry.

Michael and Alfie later find Ben in a heap surrounded by gym equipment and figure out what he's up to. They force Ben to confess that the real reason for wanting to fight Barry is that he was bullied at school.

With the encouragement of his family, Ben heads back to the pub to confront Barry and his school demons. But, when Ben arrives, he's not so sure he can go through with it - especially as humiliating facts come to light about the identity of his school bully. But, if he backs out now, will the rest of the family ever look at him in the same way?