Series 3, Episode 1 - Where The Streets Do Have Names 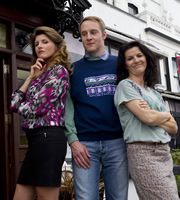 Desperately trying to cling on to her youth, Sharon quickly gets Debra's back up with plenty of bragging about her life in London, not to mention her incessant flirting with Liam. Although an intimidated Liam isn't particularly thrilled with the situation either: "It is raining strong confident women in my house, but you are like a fanny tsunami."

Martin and Padraic, meanwhile, spend the weekend in Dublin, or the "windy city of Angels" as it's known to them - they're not the best at geography. It's an exciting time for two young lads to be in the big city and, although they might not meet the real Bono or take in a show on Broadway, they do discover a hidden talent as they become successful Encyclopaedia Irelandica salesmen.

Martin and Sean are back for another series.