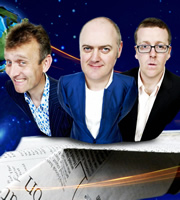 Only on Mock The Week this Christmas will you find talk of Russell Howard being sucked into a black hole, Hugh Dennis yearning for a game of Battling Tops and Frankie Boyle being crowned King of the Daleks.

Look out for bemused Aussie comedian Adam Hills who valiantly tries to bring some Christmas joy to a programme devoid of Christmas decorations, apart, that is, from a miserable Scot with a blower from a cracker.

Things You Don't Want To Hear at Christmas

A special preview clip of the 2008 Christmas show, with a festive 'scenes we'd like to see' round.