Could a madman who preys upon human flesh really be to blame for 70 years worth of disappearances in an attic called 'The Nightmare Room'? Can Jonathan solve the mystery, or will fearlessly sceptical Joey Ross get there first?
Preview clips 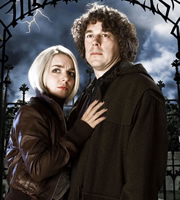 Following several disappearances from a gloomy old attic known as The Nightmare Room, Creek is completely baffled by the gothic house. Seventy years on from the first disappearance, the room continues to claim lives. Can the ghost of a madman who preys upon human flesh really be to blame?

When two young women take shelter in the attic from a raging thunderstorm, it's not long before the ominous 'presence' has claimed another victim.

Determined to discover the truth about what has happened to her friend, the fearlessly sceptical Joey Ross finds herself working alongside veteran lateral-thinker Creek. Together, they embark on a complex, often dangerous, investigation into a mystery which only continues to deepen.

Can Creek shed light on the riddle and render the impossible possible? Or are his once-formidable powers of deduction about to be eclipsed by the sheer raw intuition of his younger counterpart?

The premiere of this episode was simulcast on BBC HD.

Two Heads are Better Than One

A preview clip from the new 2009 special.