Jonathan and Joey are called upon to investigate a series of mysterious and spooky events at a house called Green Lanterns. 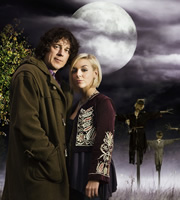 Jonathan and Joey are called upon to investigate a series of mysterious and spooky events at a house called Green Lanterns.

They concern a young girl called Emily - new housekeeper to the famous mystery writer Hugo Dore and his wife, Harriet. But Emily's new role comes with a house that has its own fair share of history and mystery... When Harriet is seen falling from a window, Emily is arrested on suspicion of murder, though she swears she is innocent. Using his powers of deduction and belief that nothing is at it seems, Creek races against time to uncover a number of intriguing clues which lead him to the unbelievable truth and the revealing of one of the greatest acts of illusion he has encountered yet.

When a young woman becomes seemingly possessed by the spirit of a Victorian sorceress, illusionist Jonathan Creek and intrepid investigator Joey Ross must fight to prove she is innocent of murder, as the supernatural detective drama returns for a one-off special.

In a lofty old timbered house on the outskirts of London, mystery surrounds the strange death of a former owner, Dr Thadeus Northcote, who, in 1889, fell victim to the supernatural powers of his Egyptian housekeeper and secret lover, the sensuously beautiful Selima Al Sharad. Spurned by her master, she is said to have sealed his fate by correctly predicting the exact time and day he would meet a dreadful, agonising death - apparently without any physical or rational explanation.

More than a hundred years later the house, Green Lanterns, has become home to celebrated crime writer Hugo Dore and his publisher wife, Harriet. But even he has been unable to unlock the riddle of Dr Northcote's death.

And when he rescues sweet young Emily Somerton from her menial job in a shoe shop to assist his ageing housekeeper Mrs Gantry, the malign presence of her Victorian predecessor once again appears to stalk the house...

Gradually, Emily becomes convinced she is losing her mind, as a series of mysterious developments suggest she is no longer in control of her own actions - and that an unearthly force is encouraging her to commit murder...

Perhaps a chance meeting with a likeable young man in a duffel coat will offer an avenue of hope?

After a friendly drink with Jonathan Creek at his London hotel the signs couldn't be more auspicious. But as the two of them look set for a romantic night together, things take an unexpected turn for the worse ... and Emily is once again left feeling alone, confused and threatened.

With events at Green Lanterns beginning to spiral out of control it is down to Joey to repair the relationship between Creek and Emily, and set the scene for a strange investigation that will take them, ultimately, to the site of the eerily isolated Judas Tree ... where the solution to the mystery proves more bizarre and shocking than either of them could have imagined.

This episode was premiered on BBC HD at 22:00 BST on the same date.