Series 5, Episode 1 - The Letters Of Septimus Noone

A classic locked room novel is turned into a West End musical... then one of its stars falls victim to a real-life 'impossible crime'.
Preview clips 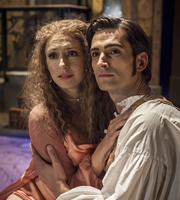 The Mystery of the Yellow Room, based on a 19th-century story by Gaston Leroux, is currently thrilling London theatre audiences with its enticing blend of music, romance and sizzling Gothic melodrama.

But events take a sinister turn one night when the show's glamorous singing sensation Juno Pirelli is found horribly stabbed inside a locked dressing room, from which no assailant could possibly have escaped.

No weapon or any other evidence of an intruder can be found, nor any rational explanation for the victim's wounds.

As the actress's life hangs in the balance, her producer and colleagues remain baffled. And attention once again turns to the lateral-thinking Jonathan Creek for a solution to the whole grisly puzzle.

But can Creek - now a happily married man - even be persuaded to embark upon the investigation? As he and his wife Polly struggle to come to terms with a sudden personal tragedy, a series of dark and disturbing family secrets are about to emerge that will throw the couple's whole world into turmoil...

Songs The Yellow Room and Drifting composed and arranged by Philip Pope.

This episode contains a number of spoofs, references and homages to the highly successful Andrew Lloyd Webber musical, The Phantom Of The Opera.

Auntie Hazel tells Polly that death might not necessarily be the end.

The Creeks try to decipher a letter they find among Polly's fathers possessions.

Jonathan and Polly at the Theatre

Jonathan Creek gets into a fight with another audience member at the theatre.