Katherine Jenkins and friends sing the Christmas No. 1s, with Liza Minnelli and Amy Winehouse popping up for special appearances.
Preview clips 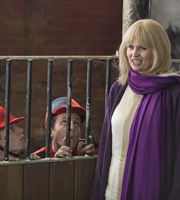 Elsewhere, Lady Gaga is forced to leave a party early when she realises her outfit isn't unique; and Julie Walters and Richard Wilson appear in a Dickens drama.

Over at the Microsoft Office they are also getting into the Christmas spirit. Meanwhile, Simon helps Cheryl with her texting etiquette - just how many kisses is it polite to sign off with? And Tim Burton and his life partner prepare for Christmas Day.

Daniel Craig tries his hand at being a mobile phone salesman. If you are looking for a phone with Bond style gadgets, Daniel Craig is putting his 007 skills to the test - and he'll get you free texts.

Ross infiltrates the dangerous realm of Carol Singers and risks his life to discover what life is like when you are part of their gang.