Master impressionist Jon Culshaw joins forces with talented Debra Stephenson, who returns to her comedy roots. No one is safe as the two of them lampoon some of the most familiar celebrities in Britain today.
Preview clips 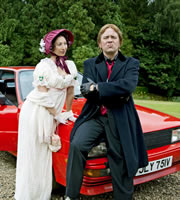 Episode one sees Michael McIntyre, The One Show, Cheryl Cole and Simon Cowell, Ricky Gervais, Davina McCall, Claudia Winkleman, Kylie and Dannii Minogue all coming in for the Culshaw and Stephenson treatment. Among many sketches, Culshaw shows viewers that Ross Kemp as not quite the hard man he'd have them believe, and Stephenson does a brilliantly acerbic Anne Robinson.

The Big Brother host reads a story for the kids.

Michael McIntyre has problems with an annoying noise.