Jimmy Carr and Lady Gaga are among the famous faces getting the Culshaw and Stephenson treatment this week.
Preview clips 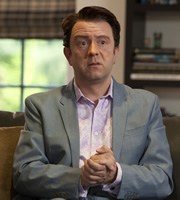 Simon Cowell reveals his latest venture and Boris Johnson makes an important announcement about new events for the 2012 Olympics. Piers Morgan struggles to make Lorraine Kelly shed a few tears and the Loose Women audition for a new presenter with surprising results.

Meanwhile, Tess Daly and Vernon Kay attempt to host a dinner party, but things don't go smoothly with Bruce Forsyth as a guest. Steven Gerrard shares his thoughts on rap music, and Bono tells his own version of a classic bedtime tale.

Boris holds a press conference to reveal the saucy new sporting events for the 2012 Olympics.

Ian Hislop tries his luck as a strippergram - unfortunately he's not a hit with the hens.