Series 2, Episode 4 - The Kipper And The Corpse 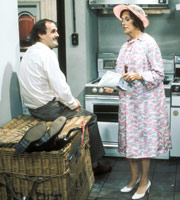 Every hotelier's worst nightmare: a stiff in one of the rooms. Basil's initially concerned as to whether the late Mr Leeman had started his breakfast, but his mind soon turns to clearing the room as soon as possible.