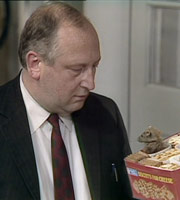 A public health inspector's visit leaves Basil with a long list of improvements to make to the hotel, but when he discovers that Manuel has been keeping a pet rat for the past year, things go from bad to worse!

This episode was supposed to broadcast on Monday 2nd April 1979, but strike action lead to it being incomplete. When finally broadcast it was billed as Fawlty Towers Special.