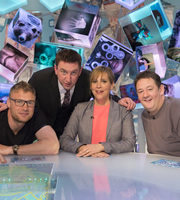 Ladies first, Mel gets the ball rolling when she reveals that gingerhaired people have a higher pain threshold than individuals of other hair colours. Cue a series of experiments involving electric shocks, an icy swimming pool and high-speed projectiles - please note that people were harmed during the making of this programme.

Freddie, meanwhile, lets us know that cows with names produce more milk than their moniker-less peers, and Johnny shares a snippet about successful queue-jumping.

A spooning session with host Lee Mack on a bed of nails also awaits.

Can anyone lie on a bed of nails?

Johnny Vegas isn't sure about lying on a bed of nails.