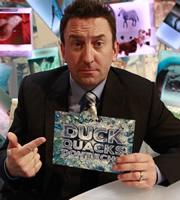 Lee Mack and a flock of celebrity guests are about to find out the answers to a whole host of questions in the riotous panel show that test-runs random bits of trivia and the world's wackiest facts by whatever means necessary.

Let the games begin in this first episode as funnyman Dara O Briain, former Spice Girl Melanie Chisholm and Stella herself, Ruth Jones, stop by the studio to try to unearth the niftiest nuggets of information.

Subjects range from the persuasive powers of touching someone's upper arm to nipple alignment, before Mel C gamely steps up to prove you can stick a fully grown adult to the ceiling using household superglue. Do not try this at home.

Does dog pee glow in the dark?