Olivia Colman, Rhod Gilbert and The Great British Bake Off judge Paul Hollywood attempt to out-fact each other. 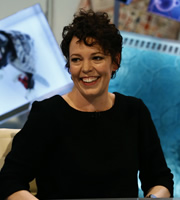 Facts tested include whether it's possible to flip an egg into a shot glass without touching the sides; a shrimp is fitter than the average human being; and, finally, a person can scale walls using household vacuums.

Also up for discussion is a pet dog's ability to 'catch' its owner's yawns, and whether or not swearing is a viable form of pain relief.