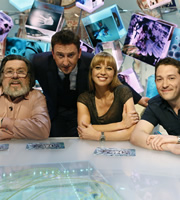 A long-held, generally accepted belief is that women are better at multi-tasking than men, but what if it's the other way round?

Lee Mack and his latest guests, actor Ricky Tomlinson (The Royle Family), comedian Jon Richardson and radio presenter Sara Cox, flip the gender cliché, before trying to figure out if scratching is contagious.

This episode was dedicated to the memory of Raymond Finesilver.