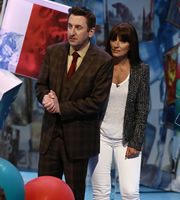 The pièce de résistance, though, is Mack's fact that you can lift a person off the ground using helium balloons, for which he needs Davina's assistance.

Can balloons lift you off the ground?

Lee Mack straps Davina McCall to a huge bunch of balloons. Will they be able to lift her off of the ground?

Can you block a tickle?

What songs make babies dance? Some very popular hits are put to the test.