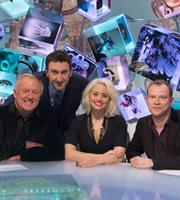 Lee Mack kicks off the final episode of the series by showing guests Chris Tarrant, Kimberly Wyatt and Robert Webb an unorthodox way of drinking wine, proving that you can open a bottle of vino with a boot. Please note that, while this is indeed possible, it's also a royal pain in the derriere - there is a very good reason why people use corkscrews rather than Caterpillars.

Kids are inquisitive creatures, sure, but did you know that the average child asks 288 questions every day? That's Tarrant's titbit, although the TV presenter doesn't disclose how many of these queries are simply the repetition of 'why'. Webb, meanwhile, goes all out to demonstrate that four ceramic cups can withstand the weight of a two-ton truck.

Confident she's got the evening's most impressive morsel, Got to Dance judge Kimberley Wyatt proposes that, in a public toilet, the cubicle closet to the door has the least amount of germs. And, who better to gather evidence for the singer's theory than former How Clean is Your House presenter Kim Woodburn.

The winning celeb then gets to assist Mack in a follicle-based final experiment.

Lee Mack suspends Kimberly Wyatt from a woman's hair to test the strength of human hair. Dr. Emily Watson is also on hand with some fascinating facts about hair.