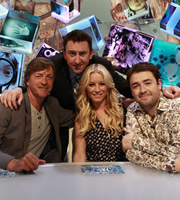 "Northerners are dirtier than southerners" - according to TV presenter Denise Van Outen it's a bona fide fact, sparking a nationwide swabbing session to see if there really is a north-south hygiene divide. Fellow guest Jason Manford doesn't want to risk incurring the wrath of half of the country so plays it safe with his trivial titbit, that people are more stupid when they're wearing swimsuits.

Rounding out this week's panel, former This Morning favourite and sometime Ali G impersonator Richard Madeley hopes to rack up the points with his theory that it's impossible to walk, swim or drive in a straight line if you have a blindfold on.

Host Lee Mack, meanwhile, needs assistance to prove that a person can fit inside a swimming cap. Yep, inside.

Can Richard Madeley fit inside a swimming cap?

Can a grown man fit inside a swimming cap? Richard Madeley attempts it.