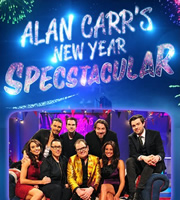 Bruno Mars performs live and Alan appears in some sketches.