Eddy's first ever boyfriend, Pete, is back on the scene, and he's in possession of a set of lost Beatles recordings. As he, Patsy and Eddy celebrate the find and prepare to unveil the tapes to the world, it seems that nothing can go wrong. 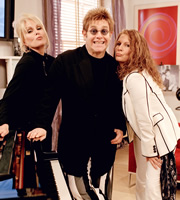 Eddy's boyfriend Pete has found himself in possession of a collection of lost Beatles recordings. After meticulous restoration, the two plan a party, with Elton John invited, to present them to the world for the first time.

The relationship seems to be going well, and the triumphant launch event seems - for once in Edina's life - to be going off without a hitch. If only Pete hadn't left them alone, drunk, at Abbey Road Studios...