A new TV venture's on the cards for Edina, and she's lined up a guest spot with Richard and Judy to help launch a new campaign; for Patsy, life revolves around a skin-freezing serum called Parralox. Saffy, meanwhile, hopes for a government job promoting British culture. 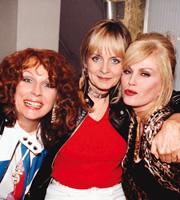 Edina has a life coach, a new television company and a new business partner in the gushing, artificial 'TV personality' Katy Grin; however she appears no more able than ever, and the equally useless Bubble is of no help.

Eddy does, however, have an appearance lined up on Richard and Judy's morning TV show with Twiggy. If it goes well, it could be very profitable for a new gay pride campaign, 'fists across America'.

Meanwhile, Patsy has become the Fashion Editor of another magazine and is injecting 'Parralox' into her face to deal with unsightly lines. Saffy is desperate to land a government job and finally move out, but begs her mother not to have the treatment herself. Gran is still around, and seems to rather enjoy living in the wake of Edina's lifestyle.

Edina's TV appearance and Saffron's job interview are looking promising, but a drunken night out with Patsy and an episode with 'Parralox' results in disaster for all concerned.