There's a homecoming for one of the women, who's been 'away' for quite some time. She arrives at the Monsoon household with a new - slightly scary - best friend who forces a certain person to face some long-hidden truths...
Preview clips 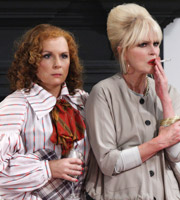 Bubble awakens Edina for a very special day. Now into social media, Edina instructs Bubble to update her website and her Twitter account, as well as to keep an eye on Mother, who has continued to steal from the house.

After passing through Brixton in her limousine, Edina arrives at a prison to greet her estranged daughter - Saffron. Saffy has been imprisoned for two years after (unknowingly, she claims) distributing forged passports to asylum seekers.

Back at the house, the family, including Saffron's father, Justin, celebrate her return. Edina and Patsy update Saffron on trends in fashion and the media, Bubble re-enacts the royal wedding and Justin discusses more political matters.

Later at night, Edina is curious as to whether Saffron discovered lesbianism in prison. Saffron replies in the negative - but says that she did make friends. Edina assures her that she would be 'cool' with them visiting.

Before long, one of Saffy's friends arrives, a tall, street-talking white girl named Baron. Sarah arrives and assumes they were in a relationship and becomes hysterical - leaving when Saffron slaps her.

Baron, a former drug dealer, recognises Patsy as a client who still owes her a lot of money - and demands it be repayed, saying that Saffy will be her 'wife' until it is. Edina assures her that Saffron will cooperate.

Saffron confronts Edina and Patsy about Baron's changed demeanour and they admit all, but claim that they cannot pay the £50,000 she demands - which soon becomes £70k.

Enquiring as to Patsy's means and her job at the magazine, it becomes apparent that she has never spent a penny of her own money, nor claimed her pension. Worse, she has no legitimate passport, no birth certificate - no identity.

As the trio sink into despair, and Patsy begins to doubt her very existence, Mother helpfully presents Patsy's old Post Office savings book. Patsy resists going to the pension office as it will mean revealing her actual age, but Edina accompanies her.

Patsy soon finds her efforts have not gone unrewarded. She is able to pay off her debts to Baron with piles to spare - a wealthy woman in her own right.

Patsy and Edina tell Saffy all about the Kardashian syndrome.

Patsy and Edina go on a shopping spree...