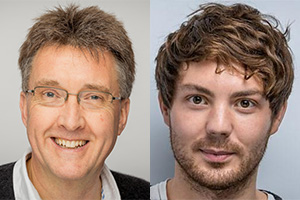 Stephen McCrum, the executive producer on This Country, and the sitcom's producer Simon Mayhew-Archer, have joined together to launch Camden Productions.

Asim Chaudhry has piloted a character comedy series for Channel 4. Coming To England follows the lives of three characters trying to make a new life in the UK.

How This Country became a hit with millennials

Hating the pilot but loving a YouTube clip the Coopers had made of a Scrabble-playing Kerry screaming to her mum "Is Dave a word?", the producer was clear: "The big thing we all wanted was that it should have the appearance of reality."

A day on the set of This Country

Sick of working odd jobs just to survive, Daisy May Cooper hounded production companies with a short sketch about Kerry, the lead character in the now critically acclaimed comedy. Sean O'Grady dusts off his acting skills and joins the actress and her brother on set.

What happened to the comedy trademark?

Comedians once embraced a signature quip or look, so why have such tropes fallen out of favour?

In the first episode there were hints of everything from Whatever Happened To The Likely Lads? and Men Behaving Badly to Seinfeld.

A Cinema Near You review:

Mathew Horne (of Gavin & Stacey TV fame) plays Alex, a struggling young cinema manager in this new comedy by Simon (Men Behaving Badly) Nye. Here's the situation: Alex has to promote a forthcoming attraction, an arty Swedish film. But no one's interested, not even Mrs Duke (Caroline Quentin), the cinema's rambly, elderly owner, or neighbouring café boss Jane (Mel Hudson), who fancies him. Here's a tip: look at the cast. Consider author's other work (translations of Molière and Dario Fo, films, TV, scholarly studies of painters, awards). This one (produced by Jane Berthoud and Simon Mayhew-Archer) may go far.