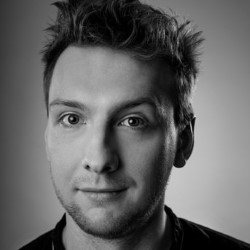 The self-proclaimed absolute lad returns, following appearances on Live at the Apollo, 8 Out of 10 Cats Does Countdown and a wine tour of the French Riviera. There's a good chance you'll Lycett. Edinburgh Comedy Award nominee. 'Cheeky, warm and super-funny' (Time Out). 'A growing force on the UK stand-up circuit ... left the audience wanting more' (Telegraph). 'Guaranteed to be a huge star' (Time Out). 'Entertainingly mischievous' (Guardian). 'Finds brilliance in what could be merely workaday' (Chortle.co.uk).

Joe Lycett - the self-proclaimed 'absolute lad' - returns to the Edinburgh Fringe with brand new show, That's The Way, A-Ha A-Ha , Joe Lycett, following appearances on Live at the Apollo, 8 Out of 10 Cats Does Countdown and Celebrity Juice.

Joe says: "This show is JAM-BLOODY-PACKED with sensational anecdotes exploring my ability to be silly and useless in various walks of life with the hope of finding some sort of meaning. Expect me to talk about my home town of Birmingham and at least one joke about will.i.am GUARANTEED or YOUR MONEY BACK!*

*This is not actually a guarantee but I do have a good joke about will.i.am which I'll probably do."

Having burst on to the scene in 2008, Joe has metaphorically demolished all in his wake, establishing himself as one of the finest comedians this country (and Birmingham) has ever produced. He is a Foster's Edinburgh Comedy Awards and Chortle Awards nominee, and blushes with embarrassment when people say things like "he's guaranteed to be a huge star" (Time Out) or that he's "intensely charming" (The Guardian) (his mum's particularly proud of the latter).

That's The Way, A-Ha A-Ha, Joe Lycett is Joe's second UK tour after an enormously successful, sell-out debut tour, If Joe Lycett Then You Should've Put A Ring On It, and follows on from him storming his first-ever appearance on Live at the Apollo and a string of other TV appearances including Never Mind the Buzzcocks, The Apprentice: You're Fired and Drunk History. Over the coming months he'll be seen on 8 Out of 10 Cats Does Countdown, Would I Lie To You? and Sunday Night at the Palladium.