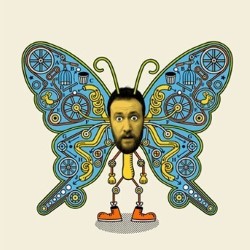 Stupidly ambitious, logistically problematic, potentially disastrous, this is the show Alex Horne has wanted to make for a decade. Finally, he will be Monsieur Butterfly. One flap of his delicate wings, and mayhem may prevail. 'A terrific, high-concept comedy show, intricately constructed and forever whipping the rug out from under us' (Guardian). 'An understated feat of choreography that once again proves Horne to be one of the most inventive comics on the Fringe. It's also extremely funny' (Observer). 'Bathing in brilliance' (Independent).

Alex Horne wants to show you his contraption.

Remember that board game, Mousetrap, where you had to build a complicated machine to catch a mouse? Now that was a brilliant board game, wasn't it? And you know that Honda advert, where all the car parts collided to make a thing happen? Now that was a brilliant advert, wasn't it? Of course, Mousetrap was a game for kids which meant you lost the rubber band and the ball-bearing would always fall off the chute. And that Honda ad actually took nine months to set up, cost a million pounds and was still only successful on the 660th attempt. Well, in this unprecedented comedy experience, you can watch Alex Horne attempt something similar in just 56 minutes. He'll have just one chance. He has not spent a million pounds. (He has, however, invested over £85 on eBay, made over ten trips to Wickes and bought a second-hand van.)

Stupidly ambitious, logistically problematic, potentially disastrous, this is the show Alex has wanted to make for a decade. Finally, he will be Monsieur Butterfly. One flap of his delicate wings, and mayhem may prevail.

Following a fourth consecutive sell-out run at the 2013 Edinburgh Festival, this year Alex Horne and The Horne Section will once again bring their unique mix of stand up, feel-good spectacle and jaw-dropping musicianship to the Fringe with their new show Milk The Tenderness at the Udderbelly.