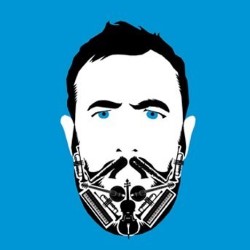 Alex Horne and his marvellous musicians return to the mother-cow hungrier, thirstier and a year older than in 2013, with a brand new show featuring songs, guests, tenderness and milk. 'A riotous splicing of live music and comedy' (Observer). 'This is a thought-provoking, anarchic and wildly entertaining welding of stand-up comedy and big band music' (Guardian). 'The finest way to spend a late night at the Fringe' (Independent). 'Like a maestro of musical mayhem, Horne conducts this blend of comedy, audience banter and songs with chaotic ease' (Mail on Sunday).

Following a fourth consecutive sell-out run at the 2013 Edinburgh Fringe Festival, Alex Horne and The Horne Section roll into Edinburgh with a brand new barnstorming show, bringing their unique mix of stand up, feel-good spectacle and jaw-dropping musicianship to the Underbelly. The Horne Section will play host to special guests from the worlds of stand-up, music and cabaret to redefine traditional musical comedy for a modern audience.

Stand-up comedian Alex Horne is the creator and host of The Horne Section. The band has enjoyed numerous sold-out runs at the Edinburgh Festival Fringe as well as at The Soho Theatre, Lyric Theatre - Shaftesbury Avenue, The Criterion Theatre and The Hackney Empire. They have hosted three series of the successful Alex Horne Presents The Horne Section on BBC Radio 4 and have hosted an episode of Never Mind the Buzzcocks (BBC Two). Later year they will be joining dictionary corner on 8 Out of 10 Cats Does Countdown (Channel 4).