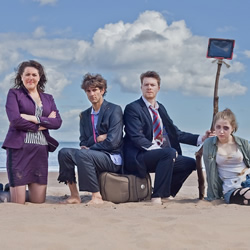 A new play set to the take the Edinburgh Fringe by storm. An all star cast, a secret seaside location, and presented by the Fringe First winning team behind 2009 smash Party.

Three bickering conference organisers and a teenage girl are the sole survivors of a fatal plane crash on a remote tropical island. We join the four characters in the immediate aftermath as they begin to come to terms with their plight. The three colleagues set about arguing over witless Crusoe-esq endeavors of survival, with the young Erin (Cave) struggling with the loss of her family.

The world premiere of Holes is an exciting and hilarious edition to Basden's portfolio. An award-winning performer in his own right, Tom picked up the Edinburgh Comedy Award Best Newcomer for Tom Basden Won't Say Anything in 2007. Basden premiered his first play, Party in 2009, which won a Fringe First and was adapted into a three-series BBC Radio 4 sitcom. Since then he has written episodes for Peep Show & Fresh Meat (Channel 4), as well as writing/creating the series Plebs (ITV2), and premiering new writing as part of The National Theatre's 2011 summer season. He continues to perform his double act - Freeze! - alongside Tim Key.

Holes will be a theatrical adventure the like of which has never been seen before at the Fringe.