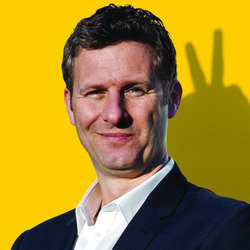 Host of Channel 4's The Last Leg, Edinburgh's favourite adopted Aussie son comes home with a brand spanking new show. Sundays with BSL sign interpreter Catherine King. 'Hills is astonishingly good at what he does' (Chortle.co.uk). 'If you cannot enjoy Adam Hills you cannot have a pulse' ***** (Scotsman).

Host of Channel 4's critically acclaimed The Last Leg, 2012 Logie Most Popular Presenter award-winner and the nicest man in comedy (**fact**), Adam Hills returns to the Edinburgh Fringe Festival this August with his brand new show Happyism. Adam will be performing at the Assembly Halls: Main Hall for a limited run only from 15th - 25th August at 7.30pm (excluding 16th & 23rd). Sunday with BSL sign interpreter.

Adam Hills - Happyism will see everyone's favourite Antipodean comedian take to the stage for a first-class evening of comedy with the usual anecdotes and audience participation all delivered in his refreshingly unique laid-back style.

Three times nominated for the prestigious Perrier Award, Adam's solo shows are established highlights at the Adelaide Fringe, the Melbourne Comedy Festival, and the Edinburgh Fringe, where he regularly sells over 10,000 tickets in the month. He has also been awarded Australia's Helpman Award for Best Comedy Performance, and has received the Best of the Fest, and Forth Fringe Award from Edinburgh Fringe critics.

As the host of the long running Australian music quiz show, Spicks and Specks, Adam Hills was seen by more than 1.2 million people on a weekly basis. He has also hosts his very own chat show on ABC Australia entitled Adam Hills in Gordon St Tonight. His UK TV appearances include Live at the Apollo (BBC One), Mock The Week (BBC Two), Channel 4's Comedy Gala, The One Show (BBC One), Alan Carr Chatty Man (Channel 4) and Never Mind The Buzzcocks (BBC Two). He has also presented his own half-hour special on Comedy Central as well as hosting two series of Four At The Store (BBC Radio 4), 4 in a Field (BBC Radio 4) and co-presented We Say Tomay-to on BBC Radio 2.

Adam Hills' new DVD will be filmed in the UK for the first time and will be recorded at the Hammersmith Apollo on 22nd September. Happyism will be released by Universal Pictures (UK) in November 2013.

Adam will also return to Channel 4 this summer for a brand new eight-part second series of The Last Leg.