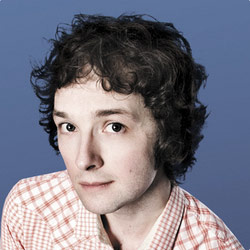 Mr Chris Addison of BAFTA Award-winning comedy The Thick of It, cIn The Loop, Skins and Lab Rats is back in Edinburgh with a nice big slab of critically acclaimed stand-up. Daftness! Whimsy! Jokes! Lies! Smartarsery! Flapping about! All present and correct.

Chris Addison, star of BBC Two's BAFTA winning comedy The Thick Of It and Oscar nominated film In The Loop, returns to the Edinburgh Festival Fringe for the first time since 2005's Perrier Award nominated Atomicity.

This critically acclaimed new show sees Chris return to stand-up with the trademark mix of daftness, whimsy, jokes, lies, smartarsery, and flapping about that earned him two nominations for the Perrier Award and another for Perrier Best Newcomer at the Fringe. Equally indignant when railing against UGG Boots or the BNP, Chris brings his biting wit to bear on his gym-based travails, sexual ineptitude, and the patronising tone of Google, in a show that's already sold out a 40-date national tour this spring, with a second leg added for autumn 2010.

In addition to starring in the multi-award winning In The Loop and The Thick Of It, Chris has been busy appearing in the new series of Mock the Week (BBC Two), where he is now a regular guest panelist. He is also the host of new live topical show, 7 Day Sunday (BBC Radio 5 Live), which launched in April this year and has been immediately recommisoned for an extended seven month run starting in September. A familiar face on TV, Chris has recently joined the cast of Skins (Channel 4), and has appeared on Live at the Apollo (BBC One), Have I Got News For You (BBC One), and Friday Night with Jonathan Ross (BBC One), as well as his own BBC Two sitcom Lab Rats. He is the author of two books: It Wasn't Me and Cautionary Tales for Grown-Ups (both Hodder & Stoughton), while his other radio credits include: the Sony Award winning The Ape That Got Lucky; Charm Offensive; Political Animal; Chris Addison's Civilization; and The Department (all BBC Radio 4). This will be Chris's sixth solo show at the Edinburgh Fringe.