Everyone is on high alert as big Valco boss Brendan O'Connor descends on the store. 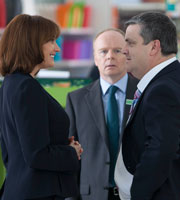 Everyone is on high alert as big Valco boss Brendan O'Connor descends on the store, furious with Gavin for 'allowing' Lauda to open opposite.

With Brendan eager to take drastic action, Gavin is forced to think fast if he is to prevent him from (quite literally) destroying the opposition.

Meanwhile, an anxious Daniel is keen to keep out of Brendan's way. He's been dating Brendan's daughter Charlie and has no idea how her alarmingly overprotective father would take the news if he found out.

Plus, while the management are at battle stations, pharmacist Brian asks his assistant Margaret for help with an audition.