It's 'Reshuffle Day' at Number 10. When the job at the Department of Social Affairs and Citizenship is turned down by everybody else, there's no option but to promote junior minister Nicola Murray to the Cabinet.
Preview clip 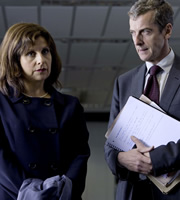 It's "Reshuffle Day" at No. 10. Nicola Murray is so far down the list of prospective ministers that Malcolm Tucker doesn't even have a file on her. But when the job at the Department of Social Affairs and Citizenship is turned down by everybody else, there's no option but to promote her to the Cabinet.

The downside is that Nicola is very keen. She also has expensive ideas and ideals; a husband who works for a company that has government contracts; an 11-year-old about to go to a private school; and she's about to face the media at a crucial by-election poster launch. Suddenly, Malcolm's got a file that's getting a bit too big for comfort. Something will have to be done.

Trailer for the new series

Nicola Murray soon discovers her new role is not quite what she imagined.