Nicola and Peter Mannion are invited onto BBC Radio 5 Live for a debate on Richard Bacon's late-night phone-in programme. 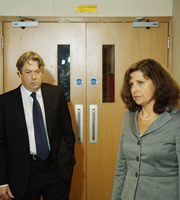 After weeks of trading bitter blows in the press, Department of Social Affairs And Citizenship minister Nicola Murray MP and her shadow, Peter Mannion MP, are invited onto BBC Radio 5 Live for a debate on Richard Bacon's late-night phone-in programme.

Director of Communications Malcolm Tucker and opposition PR guru Stewart Pearson decide to listen in the comfort of their respective offices but, when some breaking news threatens to make things difficult for the politicians, the programme quickly turns into a phone-in like no other. Malcolm and Stewart are left with no choice but to start getting their people over to the studios.