Hugh Abbott, the Minister for Social Affairs and Citizenship, is away in Australia. With the coast clear, shadow minister Peter Mannion and his team over at Opposition HQ are free to float a few new policies. 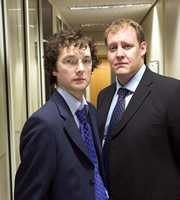 Hugh is in Australia. With the department apparently quiet, Glenn is off to renovate his sister's cottage in Wales, and Ollie is looking forward to being in charge for a week or so, feeding policies to junior minister Ben Swain. Swain is part of the 'Nutters', the main faction that hope to take over when the PM finally resigns, and he is keen to make the headlines in the post-Christmas lull. He does, but only because he gets stuffed, roasted and carved up by Jeremy Paxman on Newsnight over his complete ignorance of systems failures at the Immigration Processing Centre in Watford.

What's bad for the Nutters is good for Malcolm Tucker and his team at Number 10. Malcolm can see his days are numbered if the Nutters get in, so he's keen to keep the PM in office for as long as possible, despite the plans of Julius Nicholson, the PM's blue skies advisor, to create a lasting legacy project for the outgoing PM.

Meanwhile, Ollie's been in bed (literally) with the opposition. His new girlfriend Emma is a policy advisor for Peter Mannion. When Emma steals one of Ollie's ideas to put Mannion to work 'at the coalface' in the Immigration Centre for a week, it looks like the opposition are being handed an open goal on immigration policy. But things don't quite go to plan.