As the election looms, and the opposition is eyeing the prize, the word around the Westminster village is that Malcolm Tucker is running out of both options and friends. 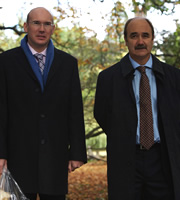 The election is looming and the opposition appears confident of winning. Malcolm Tucker, meanwhile, appears to be running out of both options and friends.

It looks like he may have bitten off more than he can chew with Steve Fleming but, when an offer of help appears from an unlikely direction, Malcolm starts to set his finest trap yet.