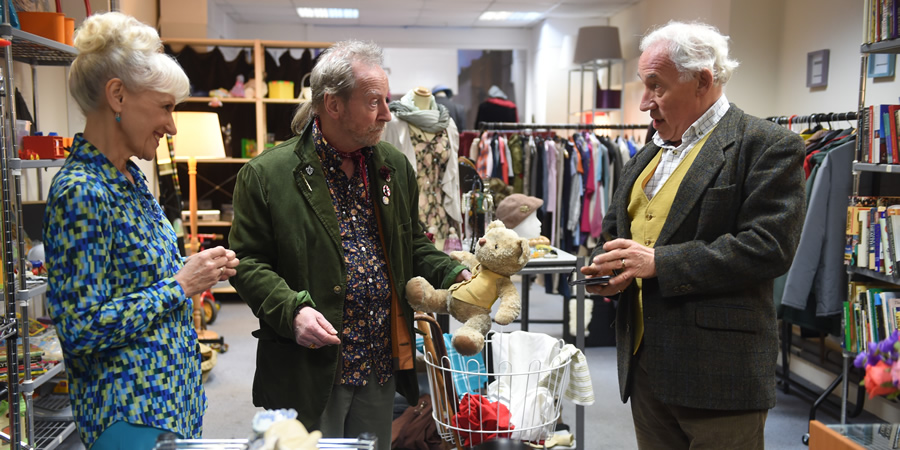 Following a reluctant visit to see his doctor, Henry witnesses a robbery and gives chase - only to be accused of homophobia by a do-gooder policeman, whom he then assaults!
Preview clips

Henry visits his GP, Dr. McGill, but only at the insistence of his daughter Cath and under protest. He doesn't want to be there; he feels as fit as a fiddle, even though everyone keeps reminding him he's 70.

Dr. McGill diagnoses possible depression and Henry puts her blood pressure apparatus in her sharps bin when she's not looking. She prescribes anti-depressants which Henry refuses to take and he storms out.

Henry pays his daily visit to the charity shop run by Margaret. While trying on a waistcoat, his best friend Charles comes in looking for a stress toy for his gerbil. Henry buys him an old teddy bear which Margaret picks out. As she opens the till, a bearded thief steals its contents.

Henry gives chase, brandishing the teddy bear... Henry confronts the thief who tries to take the bear off him. Witnessed by PC Burns, the useless policeman accuses Henry of a homophobic attack. Henry assaults him with the teddy bear and is arrested.

Cath is furious and suggests he apologise to the nice policeman in the hope of just getting a caution. Infuriated, Henry decides to go on a rebellious rampage, setting fire to a cash point in a protest against the banks, smashing a supermarket window and desecrating a font.

He ends up in court. Determined to make his rebellious point he represents himself. Despite his best efforts to go to prison... the judge has other ideas. Adjourning to the judge's chambers he discovers they went to school together. The judge is determined to let Henry off for the sake of the old school's reputation. However, Henry has other ideas...

A policeman gets in the way of Henry's mission.