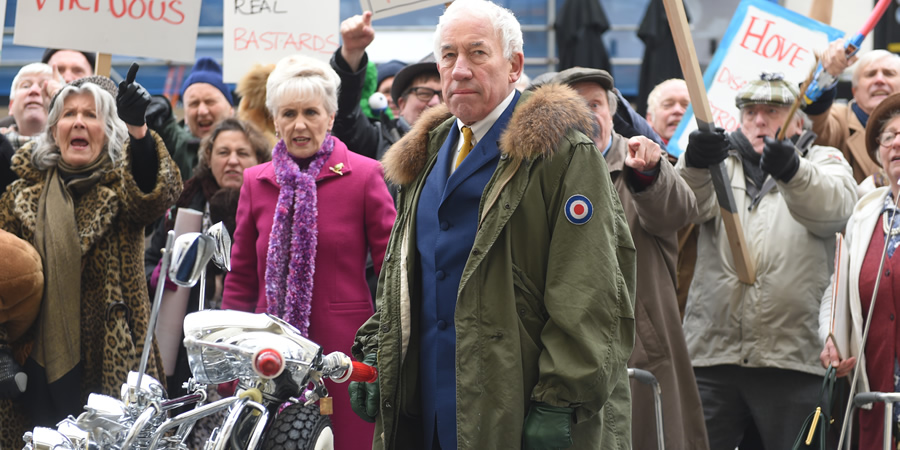 When Charles goes missing, Henry eventually finds him volunteering in a former church, now newly opened charity shop 'Virtuous'. Donations to Margaret's shop have dropped off, and they suspect are being stolen from outside the door overnight. With some investigation, the horrible truth about Virtuous begins to come to light.
Preview clips

Margaret and Henry are worried that Charles has gone missing.

Henry is still wearing the tag he's been forced to wear for his acts of vandalism. He complains about his shame to the urn in the front room. Six months after her death, he's still not scattered his wife's ashes. Just a little high, he tucks the urn up in bed...

Henry searches the park for Charles but only finds a man wearing Charles's hat who says he bought it in a new charity shop called Virtuous, which turns out to be in a converted church.

It's very well stocked, and hiding amongst the rails of clothes... is old hippie Charles, now strangely for him, dressed in a smart black suit. He's now volunteering for Virtuous in what is clearly a rival charity shop to Margaret's. Henry also meets Verity who runs Virtuous. Charles seems completely besotted and tells Henry he's moved on and so should he.

As donations to Margaret's shop seem to have dropped off, Henry takes a bag of his wife's old clothes for her to sell. Margaret persuades him that perhaps it's time for him to scatter the ashes. They're foiled by the blustery wind on Brighton pier, but seeing a container ship with the Virtuous logo on it, Henry begins to realise that perhaps that's where all Margaret's donations might be going.

Henry and Margaret plant a trap outside her shop to catch whoever is stealing the donations and follow the thief back to... Virtuous. Discovering the thief to be Charles they confront Verity.

The fake charity are stealing donations, pulling out the vintage clothing and sending it to Lithuania to sell for hard cash - and Charles has fallen for it all.

Henry and Margaret are furious. He decides to lead a rebellion of Brighton charity shops against Virtuous. And may even finally, get to scatter his wife's ashes...

War Of The Charities

Henry is getting cross on behalf of charity.